I heard a great story on Iowa Public Radio last week about the Neal Smith Wildlife Refuge, a restored prairie of over 8600 acres located just east of Des Moines.  It’s home to a herd of about 70 American bison, aka “buffalo.”

The reporter told how once a year, the bison are rounded up for genetic testing, primarily to prevent inbreeding. One man’s job is to pull hairs from their tails, so they can capture the DNA from the follicles.

A naturalist also explained how the program is committed to letting Mother Nature take her course as much as possible when it comes to bison management. Even in severe winters, they are left to scratch and forage through thick snow and ice instead of getting a few hay bales.  This is to ensure that they don’t lose the ability to find their food and digest the tough prairie grasses in future generations.

They also talked about a nine year old bull named Sparky.  He had the misfortune of getting hit by lightning last July, a bolt searing through his hump and scorching much of his hide.  He still roams the prairie, never having received any veterinary treatment.

If we hear about this happening to somebody we know, we’re there for them right away with a heartfelt hug, a teary-eyed prayer, and a shoulder to cry on.  But then we turn around and take on these burdens alone when they happen to us.  We rationalize that we don’t want to be a bother or upset someone or waste their time or ruin their night.

Although others want to help us, we think we can just suck it up.

So we take the hit.  Scar up our soul. 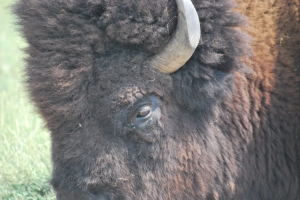 (Here’s a link to the story: http://iowapublicradio.org/post/bison-roundup-neal-smith-wildlife-refuge )

This entry was posted in Uncategorized. Bookmark the permalink.